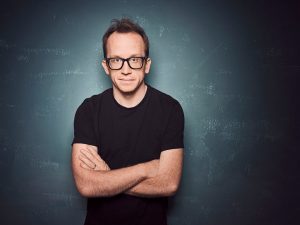 Comedian Chris Gethard, the star of The Chris Gethard Show and the host of the popular podcast Beautiful/Anonymous: Beautiful Stories from Anonymous People, will perform at Theatre 99 on Thursday, March 7th at 8 pm.

You may also recognized Gethard for his roles in films like The Heat and Mike Birbiglia’s Don’t Think Twice. He has also appeared on television shows like Comedy Central’s Broad City and Inside Amy Schumer, and NBC’s The Office and Parks and Recreation. Gethard is also the author of the books A Bad Idea I’m About to Do: True Tales of Seriously Poor Judgment and Stunningly Awkward Adventure and Lose Well. His first stand-up album My Comedy Album debuted at #2 on Billboard’s Heatseekers chart in 2014.

His one man show, Career Suicide (produced by Judd Apatow), premiered on HBO in 2017 after completing a successful off-broadway run at The Lynn Redgrave Theatre in NYC.

Tickets for his Charleston show are available online. Theatre 99 is located at 280 Meeting Street (above the Bicycle Shoppe). The stairs to their entrance are located at the back of the building.

Seating is general admission (first come, first serve) so it’s recommend arriving 30 minutes early. The closer you arrive to showtime, the harder it is to get seats together.

Their bar accepts cash or local checks only.

There is no parking at Theatre 99, so plan according.