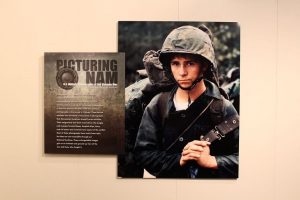 Photographs are a powerful part of our collective memory of the Vietnam War. Military photographers stationed in Vietnam took thousands of photographs that covered every aspect of the conflict – photographs that are now part of our National Archives. Their assignments sent them everywhere: the jungles and swamps, forward bases, hospital ships, rivers, and air bases. Unsanitized and uncensored, these indelible images give an intimate and ground up view of the war and those who fought it. This exhibit runs through Sunday, March 31st and is part of Patriots Point’s ongoing commemoration of the 50th anniversary of the Vietnam War. The museum is a commemorative partner of the United States Department of Defense.

“Picturing Nam” will be included in the regular price of admission to the museum and open daily from 9 am to 6:30 pm. For more information, guests may call 843-884-2727 or visit www.patriotspoint.org.

On Vietnam Veterans Day, March 29th, Patriots Point Naval & Maritime Museum will offer free admission to all Vietnam veterans. Those who fought in the war will also be pinned with an official Vietnam Veteran lapel pin. Additional details will be announced in March.