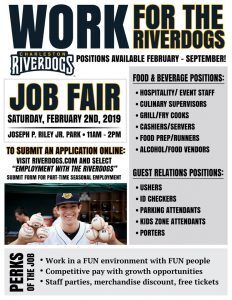 The Charleston RiverDogs are looking to fill over 200 gameday positions at The Joe for the upcoming season with two upcoming job fairs on Saturday, February 2nd and Saturday, March 9th, both from 11 am to 2 pm at Joseph P. Riley, Jr. Park.

The RiverDogs are seeking qualified candidates for seasonal positions ranging from cashiers to ushers, bat boys to mascots, and more for the 2019 season which begins with the club’s home opener on Thursday, April 11.

All interested applicants are encouraged to pre-register for this event by filling out a candidate information form located at tinyurl.com/JobsAtTheJoe and then attend one of the event dates listed below:

On-site interviews will be conducted for positions in the following areas:

Applicants are encouraged to dress appropriately.

CofC Men Get Back On Track, Down Elon 72-53 Thursday Night