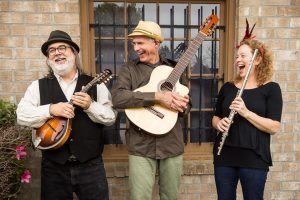 On Thursday, January 24th, patrons and the public alike can enjoy two special events at the Charleston Library Society.

At 4 pm, bestselling author Marie Benedict will be at the Library Society to enthrall guests with a very intriguing tale. While most silver screen fans recognize Hedy Lamarr as a beautiful icon of Hollywood’s golden age, a famed pin-up-level beauty, she kept a part of her life secret. While married to an Austrian official at the start of Hitler’s Third Reich, she heard things no one knew she, a woman, would understand. After escaping to the United States, she used that knowledge to help create a piece of radar-jamming tech that would one day lead to today’s Bluetooth and WiFi. In this novelization of a fascinating on- and off-screen life, Benedict shares this legendary Hollywood tale Tickets are only $5 for members and $10 for guests.

Later that evening, at 7 pm, a CLS favorite will return to the Main Reading Room. Porto Seguro, a local band with Brazilian flair, will kick off the Carnival season with their lighthearted, rhythmic tunes. Blending expert instrumental techniques with a laid-back groove in a program of well-known and unusual Brazilian songs, this is a concert you won’t want to miss. Tickets are $25 for members and $35 ror guests.

To reserve your tickets to either or both events, call 843-723-9912 or e-mail dreutter@charlestonlibrarysociety.org.

Porto Seguro’s members met through their connections with the Hungry Monk Music Studio in West Ashley but, it was not until they began working together, that they discovered three had attended the New England Conservatory in Boston. Each member hails from a different hometown and each has developed quite a different resume. And although they had no idea they shared a common alma mater, they are all delighted to call the Lowcountry home. They are playing music that is definitely not classical but it puts their Conservatory trained playing chops and years of honing ensemble skills to good use.

About The Charleston Library Society:

Follow us
Related Topics:charleston library societyMarie BenedictPorto Seguro
Up Next