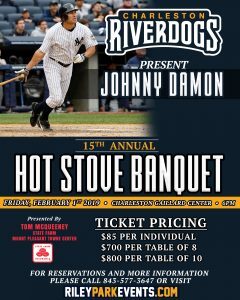 Smoak, who’s been a Major Leaguer since 2010, has enjoyed his best success in Toronto, where he’s slugged 63 home runs in the past two seasons.

The banquet’s program will also feature former Charleston Southern standout and current Chicago Cubs farmhand Chris Singleton, a nationally-renowned speaker whose message of forgiveness following the loss of his mother in the Mother Emanuel tragedy helped galvanize the Charleston community. Legendary personality and RiverDogs president emeritus Mike Veeck will join the dais and emcee the event.

“This year’s Hot Stove Banquet is special because of the unique mix of personalities from all over the baseball universe. You’ve got a World Series champion and two of the area’s most prolific homegrown talents, all tied together by Mike Veeck’s enthusiasm and charisma,” said RiverDogs president and General Manager Dave Echols.

Headlining this year’s ticket, Damon enjoyed an impressive 18-year career in the Big Leagues, most notably with the Red Sox and Yankees. A first-round pick in the 1992 Amateur Draft, the Orlando, Fla. product quickly established himself as a dynamic leadoff hitter when he debuted with the Royals in 1995. Over the course of an illustrious career, the two-time All-Star accrued over 2,700 hits with seven different teams while batting .284, hitting 109 home runs, stealing 408 bases and posting a .352 career on-base percentage. He is one of 75 players in baseball history to have stolen 400 or more bases. After signing as a free agent with the Red Sox in 2002, Damon helped bring the city of Boston their first World Series title in 86 years as part of the Sox’s historic 2004 run. After flipping sides to New York two seasons later, he was an instrumental piece of the Yankees’ 2009 championship team.

For tickets to the Hot Stove Banquet, The Meet and Greet and additional information, please contact the RiverDogs Special Events Department at (843) 577-DOGS (3647) or visit www.RileyParkEvents.com.