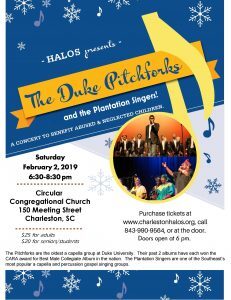 On Saturday, February 2nd, Charleston’s HALOS (Helping And Lending Outreach Support) will once again host the Duke University Pitchforks for a charity a capella concert. All ticket proceeds will go to HALOS and the local children and families they support.


The group’s ninth visit to the Holy City will also include a performance by Charleston’s own Plantation Singers, one of the most renowned a capella and percussion gospel groups in the southeast. Formed in 1996 by Charleston native Lynnette White, the group has performed across the nation as well as internationally, and are well known for their ability to reach out and draw a crowd into their performance.

Founded in 1979, The Pitchforks are the oldest a cappella group at Duke University. They have sung the national anthem at Chicago Bulls and Duke basketball games, and performed before the Queen of Jordan. Their past 2 albums have each won the CARA award for Best Male Collegiate Album in the nation.

The concert begins at 6:30 pm in the Circular Congregational Church. Tickets are $25 per person ($20 for students and senior citizens) and can be purchased in advance online or at the door.

HALOS provides support to young victims of abuse or neglect in Charleston County.