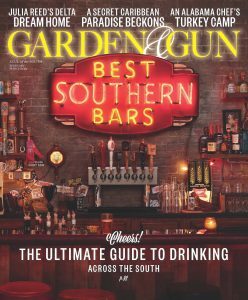 A downtown café was included in Garden & Gun’s (G&G) list of “The South’s Best New Bars.” babas on Cannon is one of just 25 establishments on the list and is the only bar from South Carolina featured.

For the feature, which is in the magazine’s February / March 2019 issue, G&G contributor and drink aficionado Wayne Curtis created a list of the best “new bars” in 12 states and 19 cities, considering only ones that have been open 2 years or less.

Curtis defines the selected new bars as such:

“They lack the natural patina that comes with age. Yet many of these Southern bars, all opened within the past two years, will leave you feeling as if they’ve been around for a while.”

His additional criteria for this ultimate guide to drinking across the South includes a “class of bar that is bringing back the lost art of hospitality, mixing outstanding cocktails, wine libraries, moods that refuse to take themselves too seriously, and bar food that doesn’t seem in the same genus as cheese fries, with the settings we’re all familiar with.”

babas on Cannon, which opened in October 2018, describes itself as “an old world café….like the neighborhood cafés of Europe.” They serve coffee and house-made pastries in the morning, sandwiches and salads in the afternoon, and apértivo service in the evening, including wines, cocktails, and snacks. They are located at 11 Cannon Street.