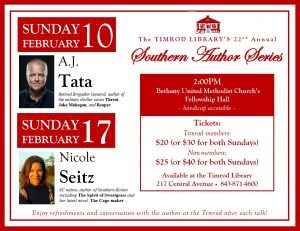 Acclaimed novelists A.J. Tata and Nicole Seitz will be the featured speakers at the 22nd Annual Southern Author Series sponsored in February by the Timrod Library in Summerville.

Tata, master of the military thriller and creator of the Jake Mahegan and Threat series and co-author of the Reaper series with Nicolas Irving, will appear on Sunday, February 10th to discuss his latest book, Dark Winter.   Retired Brigadier General Tata writes from a position of authority, having served for 28 years in the U.S. Army.  His deployments include combat missions from Afghanistan to Panama, and he has been awarded the Combat Action Badge and Bronze Star. He frequently provides foreign policy analysis on major media platforms.

On February 17th, Nicole Seitz brings her brand of southern gothic fiction to the Timrod. Beginning with her 2007 debut novel The Spirit of Sweetgrass, Seitz has delighted audiences with books influenced by both her faith and the mystique and charm of the South. Her latest novel, The Cage-maker, explores the dark secrets of a multi-generational family in New Orleans at the dawn of the 20th Century. Also a celebrated illustrator, Seitz is a native of Hilton Head and currently lives in Charleston.

Presentations on both the 10th and the 17th begin at 2 pm at the Bethany United Methodist Church Fellowship Hall, 118 W. 3rd Street South, Summerville.  A “meet the author” reception will follow at the Timrod Library.

Tickets for Timrod members are $20 ($30 for both events); non-members $25 ($40 for both events).  Tickets may be purchased in advance at the Timrod Library, 217 Central Avenue, or at the door before each presentation.