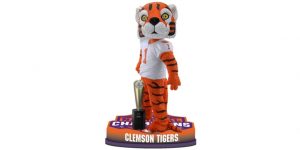 The second seeded Clemson Tigers defeated No. 1 Alabama Monday in a 44-16 blowout victory to complete a perfect 15-0 season and shock the Tide. The title is the second in three years for Clemson and the third in program history.

Clemson’s 2016 National Championship Bobblehead was the National Bobblehead Hall of Fame and Museum’s second highest-selling bobblehead of all-time, surpassed this year by Sister Jean. The 2016 bobblehead is sold out and now sells for close to $100 on the secondary market.

Redux Presents: “Hello, My Name Is,” A Group Exhibition