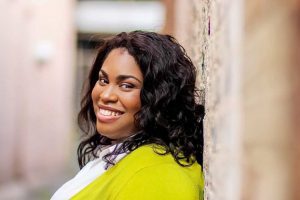 Perspective is based on experiences. Understanding different perspectives – different experiences – can shed light on intolerance, make room for dialogue and spark social change.

That is the goal of The Hate U Give, the College of Charleston’s 2018-2019 The College Reads! book, which explores themes of race, stereotypes and social justice through the main character, Starr, an African-American teenager who has to grapple with feelings of grief, anger and confusion after witnessing the fatal shooting of her friend at the hands of a police officer. The young adult novel has topped the New York Times Bestseller List for nearly two years. It was also the basis for a major motion picture, which was released last year.

On Monday, Jan. 14, 2019, the author of The Hate U Give, Angie Thomas, will give a talk entitled, “The Hate U Give: Finding Your Activism and Turning the Political into the Personal,” before participating in a Q&A. The event starts at 7 p.m. in Sottile Theatre. The event is free and open to students, faculty, staff and the Charleston community. Tickets for the event are sold out, but walk ups will be seated five minutes before showtime on a first come, first served basis depending on seating availability.

Thomas is the recipient of the 2018 William C. Morris Award, the 2018 Waterstones Children’s Book Prize, and she is the inaugural winner of the Walter Dean Myers Grant, awarded by We Need Diverse Books. Born, raised, and still residing in Jackson, Mississippi – and a former teen rapper – Thomas holds a BFA in creative writing from Belhaven University.

English professor Valerie Frazier says Thomas’ book has had a powerful impact on the CofC community.

“This book clearly has resonated with students, faculty, staff and community members, who have raved about it and participated enthusiastically in many of the activities connected to convocation,” says Frazier, whose research focuses on African American, postcolonial and women’s literature.

Incoming freshmen tackled the book’s themes of discrimination, prejudice, gun violence and social justice and activism, among other topics, as part of the College’s “convocation conversations” that tasked the students with creating visual representations of a character’s thinking or feeling.

Faculty, in an open letter to the Class of 2022, praised the students for their openness to evaluate and engage with such emotional and challenging topics.

“Your responses to The Hate U Give were impressive and brave, both your engagement with the world Angie Thomas reflects in her novel and in your willingness to relate the book’s resonant characters, places, themes and events to your own lives,” the letter said.

Frazier says Thomas’ book is an important catalyst to continue conversations about race and social justice both in the Charleston community and the world at large.

“As we grapple with the aftershocks and historical impact of slavery, [the shooting of] Walter Scott, the Emanuel Nine tragedy, and, most recently, the controversy over the Charleston Rifle Club’s blackballing of Dr. Melvin Brown, it becomes more and more apparent that such dialogue is still needed,” she says.

Frazier adds that the book’s main character serves as a powerful and relatable messenger to shed light on the complex nature of race and social justice issues in the United States.

“The words of the protagonist of the novel, Starr Carter, are particularly timely and poignant as we think of issues of race and social justice in our country: ‘People like us in situations like this become hashtags, but they rarely get justice. I think we all wait for that one time though, that one time when it ends right,’” says Frazier, quoting from the book. “Selecting The Hate U Give as the College Reads! selection is a step in the right direction.”