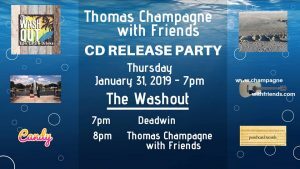 The group’s video for “Candy” featuring Whitney Hanna can be seen at the conclusion of this post. It was directed by Hector Salazar and was filmed all over the Charleston area.

Thomas Champagne and Friends will celebrate the upcoming release of their new album, Love, with a Release Party at The Washout on Folly Beach starting at 7 pm on Thursday, January 31st. Here’s a look at the show’s schedule:

Follow us
Related Topics:Thomas Champagne and Friends
Up Next