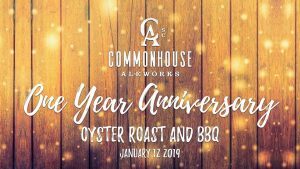 Commonhouse Aleworks in Park Circle invites the public to celebrate their first birthday on January 12th at their One Year Anniversary Oyster Roast and BBQ.

Chef Brannon Florie (On Forty One, Pier 41, and Pier 22) will be on hand cooking up oysters along with Will Cook (High to Lowcountry BBQ) who will have pulled pork and fixins. A la carte BBQ plates and Holy Rolly ice cream will be available for purchase as well. Tickets for All-You-Can-Eat oysters and BBQ are $35 in advance and can be purchased here.

The food will be accompanied by a special anniversary barrel aged bottle release. Two variants of an imperial stout aged in Old Forester barrels for 10 months will be bottled and available for purchase. There will also be a special draft list including the new barrel aged stout, Barrel Aged Cinnamon Obscured Vision Stout, house brewed Sierra Nevada Resilience IPA, as well as a new Galaxy hopped IPA.

Entertainment throughout the day will be provided by Danielle Howle from 1 pm to 4 pm and Jump Castle Riot from 6 pm to 9 pm on the new Commonground stage.

For more information, visit www.commonhousealeworks.com and follow them on social media.

Return of the Mac Off: Charleston’s Cheesiest Event Set for 1/12

The 13th Annual Charleston Walk for Water is on March 30th