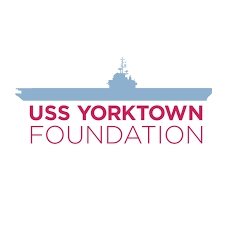 The USS Yorktown Foundation teamed with the Patriots Point Naval & Maritime Museum to donate $12,000 to support both a North Carolina and South Carolina food bank which have shown unwavering support to hurricane Florence victims since the storm hit in August 2018.  The donations of $6,000 to the Helping Hands food bank located in Dillon, SC and $6,000 to the Food Bank of Central and Eastern NC, were made during the holiday season when supplies are needed most.

“The effects of major hurricanes like Florence are felt for months and in some cases years after the storms hit,” said USS Yorktown Foundation Executive Director Allison Hunt.  “We worked with Patriots Point Naval & Maritime Museum earlier this year to raise funds during a special hurricane relief weekend for Florence victims, as we did last year for hurricane Harvey victims.  The combined effort generated $12,000 that we decided to donate over the holiday season.”

“We hope these donations provide food and are uplifting to families who may go without warm meals over the holiday season,” said Patriots Point Development Authority Chairman Ray Chandler.  “The Charleston area was very fortunate to have been spared any major damage from hurricanes over the last few years.  We don’t take that for granted.”

For more information about the USS Yorktown Foundation visit www.ussyorktownfoundation.org.

TCCC Board of Directors Welcomes Rev. Nelson B. Rivers, III