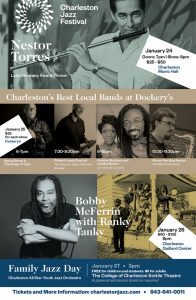 The highly anticipated Charleston Jazz Festival is back for its fifth year in the Holy City with a star-studded line-up. This 4-day festival presents over 100 professional and youth jazz artists from the national, regional and local jazz scene.

The festival takes place January 24 – 27, 2019 with events at multiple locations throughout Charleston including the Charleston Music Hall. Charleston Gaillard Center, Dockery’s, and the College of Charleston Sottile Theatre. The 2019 line-up is expected to draw nearly 4,000 jazz lovers with 30% from outside Charleston.

Headliners for the 5th annual jazz festival include 10 time Grammy Award winner Bobby McFerrin with Charleston’s Ranky Tanky at the Charleston Gaillard Center on January 26.  With 10 Grammy Awards and his #1 global hit Don’t Worry, Be Happy, Bobby McFerrin’s great gift to his audience is transforming a concert hall into a playground. For years, the jazz and classical worlds have celebrated Mr. McFerrin’s innovative technique and spirit and his concerts are often described as “legendary.” Sharing the stage with Bobby McFerrin is Charleston’s Ranky Tanky, a gifted quintet of celebrated musicians from the South Carolina Lowcountry, most of whom trace their roots directly back to a unique African American culture called Gullah. Released in October 2017, Ranky Tanky’s debut album reached #1 on the Billboard, Amazon and iTunes jazz charts.

The 5th annual festival also welcomes Latin jazz all-star Nestor Torres. This talented jazz flautist and his band from Miami will perform at the Charleston Music Hall on January 24, 2019. Nestor has recorded 14 solo albums, received four Latin Grammy nominations, one Grammy nomination, and one Latin Grammy Award. He has collaborated with a diverse range of artists such as Gloria Estefan, Herbie Hancock, Kenny Loggins, Tito Puente, Michel Camilo, Paquito D’Rivera and Arturo Sandoval. Born in Mayaguez, Puerto Rico, Nestor studied flute at Berklee College of Music and the New England Conservatory of Music in Boston. He learned to improvise with ‘Charanga’ Cuban Dance music, which helped shape his unique melodic and danceable style.

The Robert Lewis Quartet: The Acoustic Side of Michael Brecker –  This concert features the saxophone chops of Robert Lewis along with an all-star band including Demetrius Doctor (piano), Ben Wells (bass), and David Patterson (drums). The band will pay tribute to one of the most influential and beloved tenor saxophonists since John Coltrane – Michael Brecker.  His performances on hundreds of jazz, pop, R&B, and rock albums largely defined the sound of the saxophone through the 1970’s, 80’s and 90’s. He is widely admired for his contributions to albums by Paul Simon, Eric Clapton, Steely Dan, John Lennon, and countless others, but it is his jazz recordings that completely re-imagined the possibilities of the saxophone and the genre of jazz.

Simon Harding Sextet: Hard Bop Homecoming – This exciting concert features the return of Charleston’s saxophone great Simon Harding. Simon, who now lives in Waterloo, Iowa, returns to play the straight-ahead, high-energy jazz known as Hard Bop, which came into prominence in the late 1950’s and 60’s. Lee Morgan, Wayne Shorter, and Art Blakey are some of its great pioneers and Simon’s group is sure to tackle this music to the ground. Joining Simon will be Jon Thornton (trumpet), Chris Connolly (Trombone), Richard White II (piano), Jeremy Wolf (bass), and Asa Holgate (drums).

Family Jazz Day will be held on Sunday, January 27 at the College of Charleston Sottile Theatre and will feature the Charleston All-Star Youth Jazz Orchestra, the School of the Arts Jazz Band, and other visiting youth jazz bands. Family Jazz Day is free for children and students.
2019 Charleston Jazz Festival Schedule

The Charleston Jazz Festival is presented and produced by Charleston Jazz, a nonprofit 501(c)3 organization with a mission of growing a local and global community for jazz through performance, education and outreach while celebrating and preserving Charleston’s rich history in jazz.