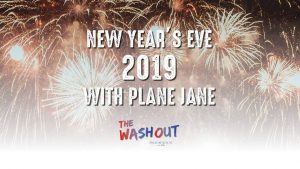 Local party band Plane Jane will play the final show ever on New Year’s Eve at The Washout. The group earlier this fall announced that they are wrapping up their time as a band, and have been playing their Farewell Tour at venues around town. New Year’s Eve at The Washout will be the band’s final show after a long career as one of Charleston’s most popular acts.
For $60 per person (or $100 per couple), guests can ring in the new year with complimentary food and drinks, party favors, champagne, live music, and a front-row seat to the Folly Beach firework show. The celebration begins at 7 pm, while Plane Jane starts their set at 8 pm. All guests will be invited to welcome the New Year with a champagne toast at the stroke of midnight.
“I’ve been friends with the Plane Jane guys for more than 25 years,” Washout owner Steve Carroll said. “They’ve played every venue I’ve ever been involved with and we’re honored to be the place they chose to play their very last show. We’re looking forward to giving them a really huge sendoff after almost three decades of being Charleston’s favorite band.”
For more information about New Year’s Eve with Plane Jane at The Washout and to purchase your tickets, visit https://follywashout.com/events.php. The Washout is located at 41 Center Street.