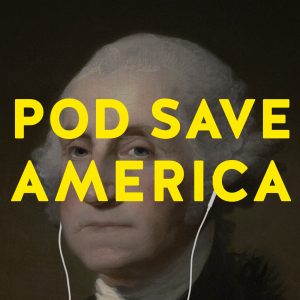 Pod Tours America’s engagement, originally scheduled at the North Charleston Performing Arts Center, is being relocated to the Charleston Music Hall on February 7, 2019.

Guests who purchased a ticket to the original engagement will receive a refund to their original point of purchase and will also receive a special pre-sale code from the Charleston Music Hall to purchase a new ticket to Pod Tours America at its new location.

Tickets at the new venue will be on sale to the public on Friday, January 25th at 10 am at the Charleston Music Hall box office or through CharlestonMusicHall.com.

The podcast, which debuted in January 2017, has been downloaded more than 370 million times, and was dubbed “the voice in blue America’s head” by New York Times Magazine. The show averages more than 1.5 million listeners per episode. In addition, four Pod Save America one-hour HBO TV specials aired in fall 2018 to cover the U.S. midterm elections. You can learn more about the podcast on their website: https://crooked.com/podcast-series/pod-save-america.

Tickets, which include a VIP option, can be purchased here.

Follow us
Related Topics:north charleston performing arts centerPod Save America
Up Next