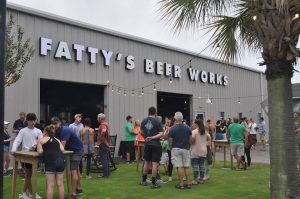 Fatty’s Beer Works on Monday introduced its newest beer, 710 SMASH (Single Malt And Single Hop) India Pale Ale, brewed with hemp from the Charleston Hemp Company. You can snag a first taste of the brew at the beer release party on Tuesday, December 18th from 5 pm to 7 pm at brewery in downtown Charleston.

“The beer is a super dry and crisp IPA with low bitterness and a huge bouquet of dank passion fruit with delicate hemp notes,” Fatty’s director of operations Ben Chambers, said. “We’re excited to introduce the community to a new flavor.”

For the beer lovers: Fatty’s brewers used all Golden Promise malt solely with the sensational and newly cultivated Strata hops.

“Creating a Hemp-infused beer is a great way to educate folks that hemp is not marijuana,” David Bulick, owner of Charleston Hemp Company, said. “Since this is the first year hemp is legal to grow in South Carolina, we are still educating the community on what it is.”

Bulick said that adding hemp to beer has the effect (for some drinkers) of creating a sense of well-being or stress reduction, without the hallucinogenic effects of hemp’s cousin, marijuana.

For the launch party on the 18th, Fatty’s will feature music by Bill Wilson, the Charleston music legend who just released his debut album at age 76.

Plus, guests can shop Charleston Hemp Company’s top selling products like the full-spectrum tincture oil and scented, natural salves. All products can also be purchased on its brand-new website.

The event is free and open to the public. Fatty’s Beer Works is located at 1436 Meeting Street. Street parking is available on Lemon Street. Check out the official event page here.

Follow us
Related Topics:Charleston Hemp CompanyFatty's Beer Works
Up Next