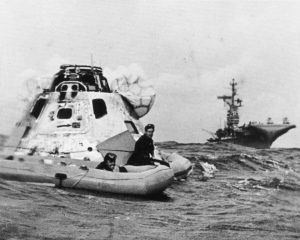 On Saturday, December 15th, Patriots Point Naval & Maritime Museum will host a special Space Day to celebrate the 50th anniversary of the USS Yorktown’s recovery of the Apollo 8 space capsule. The museum will offer family-friendly activities from 10 am to 2 pm that relate to space and the Apollo 8 mission.

Space Day will be included in the normal price of admission. As always, children under the age of six are free. Visitors may board a replica of the Apollo 8 space capsule that, through the use of historic video and an advanced sound system, simulates the 1968 trip around the moon. Additional highlights of Space Day include the premier of an exclusive Patriots Point interview with member of the three-astronaut Apollo 8 crew Capt. James Lovell, and a chance to see pieces of a real meteorite. Patriots Point’s education team will offer a limited amount of free virtual reality (VR) experiences. The VR experience will be an abridged version of the” Journey to Planet X” program that is offered to overnight camping and education groups.

Visitors who attend Space Day will have a chance to meet Robert Coggins, a member of the Navy’s Underwater Demolition Team (UDT). The UDT dropped from helicopters into the sea to attach an inflatable collar around the Apollo 8 capsule and help the space crew climb into a raft. Coggins will sign photos and speak about his role in the space crew’s recovery.

The Apollo 8 mission was a major success for the United States in the race to beat the Russians to the moon. Frank Borman, James Lovell, and William Anders became the first men to ever complete a lunar orbit and return safely to Earth. The USS Yorktown recovered the crew and capsule in the Pacific Ocean on December 27, 1968. Upon boarding the ship, the three men were examined by doctors and then took calls from world leaders who congratulated them on the historic accomplishment. 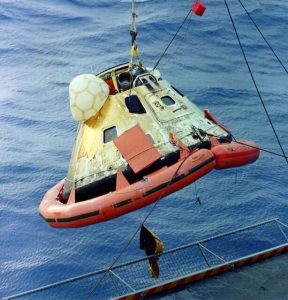 Oysters on the Point Returns this Month