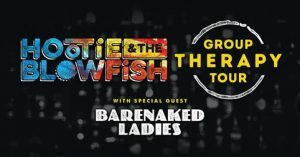 Hootie & the Blowfish surprised fans Monday by announcing that for the first time in over a decade they will be releasing new music and embarking on the Group Therapy Tour in 2019. The band sold out the tour’s Columbia homecoming finale on Friday, September 13th when tickets went on sale to the general public, prompting the band to add a second Colonial Life Arena show on Thursday, September 12th.

Citi is the official pre-sale credit card for the Group Therapy Tour. As such, Citi cardmembers will have access to purchase pre-sale tickets for the added show beginning Monday, December 10th, at 10 am local time until Thursday, December 13th at 10 pm local time through Citi’s Private Pass program. For complete pre-sale details visit www.citiprivatepass.com.

Hootie & the Blowfish fan club members can also access an exclusive pre-sale Monday, December 10th. Barenaked Ladies fans who have purchased VIP packages in the past will receive an exclusive code to purchase tickets early on Wednesday, December 12th before they go on sale to the general public Friday, December 14th at www.LiveNation.com. All pre-sale and on-sale times are 10 am local.

“We always felt there would be another tour, and it was just about timing,” lead singer Darius Rucker said in a press release. “We’re not doing this for us. We’re doing it for those people who used to plan their vacations around the Hootie & the Blowfish tour and we can’t wait to see them again.”

“It means the world that our fans have reacted so positively this week, especially in a city as important to us as Columbia, where we get to play for the first time in almost 20 years,” guitarist Mark Bryan said in the same release.

In addition to hitting the road on the Group Therapy Tour in 2019, the band will also release a forthcoming sixth studio album under new label home Universal Music Group Nashville as their debut Cracked Rear View celebrates its 25th anniversary.

Follow us
Related Topics:colonial life arenacolumbiahootie & the blowfish
Up Next