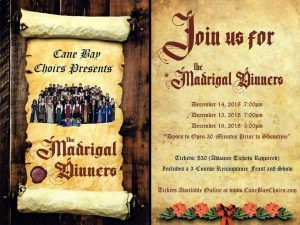 The Cane Bay Cobra Choirs will present their Annual Madrigal Dinners on Friday, December 14th and Saturday, December 15th at 7 pm and December 16th at 5 pm.

This year’s show is entitled “Robin Hood & His Merrie Men of the Round Table” and was written by CBH student Jesse Stratford. The school district provided the following synopsis of the show: “Robin Hood and his merry men are caught in the castle stealing from the King. During their escape Robin Hood knocks his head and gets amnesia. Prince John, on the outs with his father the King, convinces Robin Hood that he really steals from the poor to give to the rich in an effort to retrieve the King’s stolen goods. Through the process it is found out that things are not as they appear, or who they appear to be.”

Tickets for the Annual Madrigal Dinners are $30 per person and include a 3-course meal and the show. Advanced tickets must be purchased for this show.

The 3-course meal consists of vegetable soup with Logan’s Roadhouse roll, Smoked Chicken Leg and Quarter with roasted green beans and potatoes, and apple pie a la mode for dessert.

Oysters on the Point Returns this Month