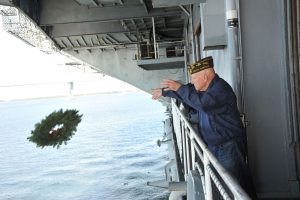 Patriots Point Naval & Maritime Museum will host a free Pearl Harbor Day Memorial Service aboard the USS Yorktown on Friday, December 7th at 11 am to honor the 25 known South Carolinians who were killed during the 1941 Japanese attack.

The service, organized together with Veterans of Foreign Wars (VFW) Post 10624, will include a wreath laying, tolling of a bell, and a traditional gun salute. Col. Gregory Kitchens, USMCR (Ret.) will be the featured speaker.

Col. Kitchens, a 1984 graduate of The Citadel, is a recipient of the Justice Chambers Award for Leadership. He retired in 2016 after nearly 37 years of service.

Museum admission and parking will be waived from 10 am to 11 am for the memorial service. Throughout the day, museum curators will have unique artifacts from ships involved in the Pearl Harbor attack on display. The exhibit will include shrapnel from a bomb that hit the USS West Virginia.

The Japanese used more than 350 aircraft during the hour-and-15-minute attack on Pearl Harbor. More than 2,403 U.S. personnel, including 68 civilians were killed. In total, more than 300 U.S. aircraft and 19 Navy ships were destroyed or damaged, including eight battleships.