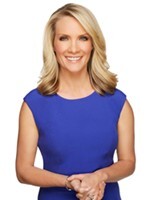 Author, educator, speaker, local news reporter, past White House Press Secretary, and political commentator, Dana Perino has accomplished quite a lot since graduating from Colorado State University in 1993. More than just another pretty face on television, Perino has put her degree in mass communication (minor in political science), as well as her masters degree in public affairs (University of Illinois Springfield) to work as she has steadily advanced her career and conservative agenda. Since George W. Bush left office in 2009, and her role as Press Secretary ended Perino has been a regular on the Fox News Channel currently active in two of their daily programs.

Over her 25 year career Perino considers herself somewhat of a determined person. “I think it’s that way with most people, and perhaps even more so with women because career opportunities are very competitive. I do have that drive inside me that always wants to achieve more.” She agrees working at the White House opened several doors for her. “I definitely love what I’m doing now. I took a long detour to get here but I feel I’m in the right place.” She has empathy for Sarah Sanders, President Trump’s current Press Secretary. “Because I’ve been there I know what she’s going through.”

Growing up outside Denver, Colorado, Perino says family life nurtured her conservative values. “Looking back that’s always been true. It’s just how I was raised. Obviously my parents had a lot to do with shaping who I’ve become and I owe them a debt of gratitude.” It was Perino’s father who instilled a desire for topical information in her. “My dad was a voracious news reader. He couldn’t get enough of it. Growing up we watched all the news channels, like Meet The Press, 60 Minutes, and we read everything from Newsweek, Time, World Report to National Geographic. Newspapers, news magazines, and news channels were a big part of my formative years.”

For Perino becoming news worthy began at an early age. “It was thrust upon me by the time I was in third grade. My dad would challenge me to have two news stories read and we would discuss them before dinner.” She credits her father who often played devils advocate during their discussions for making her stronger when sharing her opinions in male dominated situations. “I didn’t realize it back then, but he was preparing me for when I would go out on my own. He understood the importance of staying informed.”

Her path to the White House came by unusual methods. Perino tired of local news reporting, returned to her parents home after graduation, waited tables while trying to figure out her next move. “The irony was I went to school for communications because I really wanted to be a journalist. I wanted to be a political news journalist.” By the mid 1990’s she found herself working in Washington DC. “I started out answering phones and before long I was the press secretary for a congressman from Colorado. And I did that for a little over three years.”

Then the unexpected happened, love threw Perino a curve ball. She met English businessman Peter McMahon, her future husband on a plane trip. The year was 1996. Two years later the couple were married and Perino moved to Great Britian. The McMahon’s would return to the United States, settling in San Diego. Although she enjoyed her stay in southern California Perino admits she yearned for more.

A call from a friend after 9/11 changed her life. With increased workloads for spokespersons in DC and Homeland Security not yet an entity in 2001, Perino answered the call to take a job in the nation’s capitol. “I was antsy and ready to jump into something I felt compelled to do.” According to Perino she was happy working behind the scenes for the Justice Department. “It was certainly less stressful.”

She continued to shine during the Bush administration becoming Deputy Press Secretary in 2005, taking on the role of White House Press Secretary in 2007 when her boss Tony Snow stepped down to deal with his fight with cancer. In a bizarre career twist of fate, Perino and her husband had decided prior to her appointment that she was going to leave her post because it was too demanding and time consuming. Had she spoke up first before White House Communications Director Ed Gillepsie offered her the position, Perino’s time in the limelight may have been different.

A majority of White House Press Secretaries have been men. Perino is the second to hold that title behind Dee Dee Myers who worked for President Bill Clinton. “I think we’ve proved that a woman can easily handle the job as well as a man. It’s very demanding and you have to be well prepared.” She agrees Sarah Sanders is doing a remarkable job. “She handles herself extremely well.”

Perino acknowledges that all her jobs ultimately were preparing her for her stint on the Fox News Channel, where she hosts her own show ‘The Daily Briefing’ 2pm weekdays, and as a panelist on ‘The Five’ an opinion driven topical news show set in roundtable format. Dana is joined regularly by Jesse Watters, Kimberly Guilfoyle, Greg Gutfeld, and Juan Williams, with Williams the lone liberal voice among the group.

She doesn’t feel Williams is disadvantaged on the panel. “Often times I feel myself agreeing with Juan. He makes some strong arguments for the issues he’s passionate about. I like to think I’m open minded and can look at both sides of an issue before deciding how to weigh in on it.”

Created in 2011 ‘The Five’ became the second highest rated cable news show in 2013 and continues to be a favorite among conservatives today. According to Perino the eclectic personalities of the five panelists are what make the show so interesting to the viewers. “We all come from different backgrounds and places in our lives. Viewers have gotten to know Jesse from ‘Watters’ World’ so they relate to his humor. Of course Kimberly is a former prosecutor and has been around politics for quite some time. Anyone who watches Greg’s show knows he’s just out there. He speaks his mind. Juan is not afraid to speak up on any issue. He’s well respected in our industry. Ultimately I think it’s a good mix and the biggest thing is we don’t take ourselves too seriously.”

Perino is convinced the greatest separation between liberal and conservative views today deal with quick decision making. “We live in an instant society where we get news and information in a matter of minutes, sometimes in seconds. I don’t think we are as divided as we were in the past, as in the 1960’s. We just don’t think ahead. We form opinions to fast, oftentimes on views and thoughts shared on social media. There’s always a danger when we’re not fully informed.”

While she agrees that the younger generation should be passionate about the direction of the country and causes they feel adamant about, Perino is fearful they might live in a bubble. “Unless you take time to read up on issues and fully invest the time to become more knowledgeable on social issues you are doing yourself an injustice. If you survive on social media alone and solely communicate that way, I don’t think you can verbalize yourself as well when it comes to discussing issues that effect our country and the world overall.”

Perino admits working for Fox News suits her well. “It’s an ideal fit for me. I get paid to be informed. I’m blessed that way.” Preparation is her biggest challenge day to day. “I might spend three or four hours every morning soaking up as much news as I can to prepare to talk about it later in the day. The downside is sometimes I’ll go workout and when I get done everything in the news has changed.”

Putting her knowledge of topical news and pop culture to the test Perino appeared on Jeopardy! in May 2012 during its “Power Players” week, facing off against NBA legend Kareem Abdul-Jabbar and CNBC’s David Faber. “I have never been more nervous in my life. Taking the podium at the White House Briefing Room was a piece of cake compared to Jeopardy!. I’m standing next to Kareem who is two feet taller than me. If that’s not daunting enough you have to be quick to answer questions. I grew up watching the show, but it’s a whole lot easier at home in your living room. Ultimately I got to raise $10K for Pets For Vets that provides rescue dogs to veterans with PSTD. So it was well worth it.”

For the most part Perino is just as you see her on television, sweet, calm and collected. However her pet peeve is shared by millions of decent people. “I’m hypersensitive to people who are bullied. I see know reason for people to treat others in a mean spirited way. We’re all different but that doesn’t call for being bullied.”

When Ms. Perino wants to escape the fast paced metropolis of the Big Apple she and her husband spend their down time in the low country just outside Hilton Head. “We’d never been to the low country of South Carolina. Like so many do we witnessed it for the first time by attending a wedding back in September of 2011. We actually discovered Palmetto Bluff in Bluffton. Immediately we thought what kind of magical place is this, and Peter and I starting talking about, maybe we could make a home here.”

But they wanted to be certain before making the move. “Over the next year or so we kept wondering if there was something wrong with the area, but we couldn’t find one thing. We knew we couldn’t afford to live in New York City and we didn’t want to live in the DC area. Eventually we spent a week between Christmas and New Year’s in Bluffton and decided Palmetto Bluff is where we wanted to establish some roots.” They would end up building a home in 2013.

Perino discovered what so many other transplants have. “Part of the reason we moved to Palmetto Bluff is the beauty of the area. I grew up in Colorado surrounded by the Rocky Mountains, and landscape is very important to me. Palmetto Bluff is a beautiful place to live, and a great place for us to relax. We’ve made many friends and the people are so nice there.” She is a big fan or the neighborhood’s ‘Nextdoor’ network. “It’s very similar to Google Communities. With print publications declining networks like Nextdoor keep communities informed on what’s happening in our neighborhood, and everyone who knows me knows I like to stay informed.”

It is in Bluffton where Perino wrote her first book, “And the Good News Is …: Lessons and Advice from the Bright Side,” recounting her time as White House spokesperson, as well as her optimistic view on life. The book came out in 2015. In October of 2016 she made her dog one of the most noted pets on television when she released, “Let Me Tell You about Jasper . . .: How My Best Friend Became America’s Dog”. In her second book Perino shares personal stories of friends, family, and how America’s love for Jasper is a place where even political adversaries can find common ground.

For now Dana Perino is happy spending part time in her low country home and an apartment in New York City where she is closer to work. “I imagine in the future we will reside in Palmetto Bluff full time. Thankfully Fox thinks I’m employable so that’s a good thing. I can’t complain, I get paid to do something that I would do for free, and that is stay informed.”