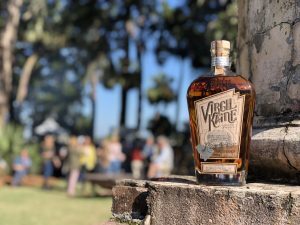 Always the one to turn the typical on its head, Virgil Kaine Lowcountry Whiskey is selling its one-of-a-kind, twice-aged whiskey this fall: Roundhouse Double Barrel Whiskey.

Back in 2014 during the barrel shortage, Virgil Kaine did what it does best — tackle a problem head-on and adapt. Even though they found themselves in a situation they’d never encountered before, the creators at Virgil Kaine chose to see opportunity in adversity. The result is an American whiskey hailing from a traditional bourbon mash bill, which was aged first in used bourbon barrels for over four years before finally completing its destiny with a second round of finishing in American charred white oak barrels.

The result is a deliciously smooth whiskey with light notes of oak, vanilla, fresh quinces and a faint hint of butterscotch. Bourbon enthusiasts will be delighted to know that this batch’s mash bill is 75 percent corn, 21 percent rye, and 4 percent malted barley. This American whiskey is higher proofed but not overpowering —a true crowd pleaser at 98.6 proof.

December 6th from 3 pm to 5 pm. Join Virgil Kaine at The Bar at Husk in Charleston to help celebrate the release of their 2018 limited time offering.

Virgil Kaine was founded in 2011 by David Szlam and Ryan Meany, so they could make whiskey that put flavor and drinkability over everything else. Both accomplished chefs, Szlam and Meany draw on their culinary know-how to blend, infuse and tinker with choice ingredients when they craft their category-defining whiskeys. True to their Southern roots, Szlam and Meany create honest, unpretentious whiskeys that are as approachable as they are premium. The folks over at Virgil Kaine Lowcountry Whiskey aren’t traditionalists, and they continue to think outside the barrel to craft whiskey for the whiskey lover who’s looking for something a little different and above all – tasty.To learn more about Virgil Kaine, visit www.virgilkaine.com.

Is It Profitable to Be a Freelance Writer in Charleston?