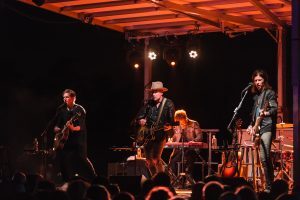 The seventh annual NEEDTOBREATHE Classic is set for March 25, 2019, at the Daniel Island Club. Golfers from around the country converge on the Lowcountry for a chance to hit the links with musicians, athletes and actors. The event culminates in an evening concert featuring southern rock band NEEDTOBREATHE and other musicians at the Charleston Music Farm.

Last year’s sell-out event raised more than $200,000 for OneWorld Health for its work empowering communities around the world to achieve long-term improvements in health and quality of life. The annual golf tournament was started by Commonwealth Cares Foundation, the charitable foundation of Daniel Island financial services firm Commonwealth.

“This event combines an incredible day of golf and a once-in-a-lifetime concert experience – all with the benefit of supporting an organization that is saving lives around the world,” Britt Gilbert, founder of Commonwealth Cares Foundation, said. “The 2018 event sold out weeks in advance, so get signed up now or, during this holiday season, give someone the gift of an amazing experience while giving back to an important global charity.”

Choose a celebrity golf experience or a simple standard foursome – both of which include access to the after-party concert. Register by Nov. 30 for early-bird pricing. Additional discounted pricing is available in December for anyone interested surprising a loved one with a day of golf. Registration and sponsorship details are available at www.commonwealthcares.org.

On the heels of the biggest and best-selling tour of their career, NEEDTOBREATHE will hit the road in February for their Acoustic Live Tour, this time in support of its first-ever acoustic live album, Acoustic Live Vol. 1, which is available now.

Founded in 2007 as a 501(c)(3), Commonwealth Cares Foundation is the charitable arm of Commonwealth, a Daniel Island-based comprehensive financial services firm with a division focused on providing financial planning services to physicians and the medical community. The firm brings a values-based philosophy, offering clients independent advice through a consultative, team-oriented approach. For more information, visit commonwealthcares.org.

NEEDTOBREATHE is a GRAMMY-nominated rock band hailing from South Carolina, comprised of brothers Bear Rinehart (vocals, guitar) and Bo Rinehart (guitar, vocals), Seth Bolt (bass, vocals), and Josh Lovelace (keys, vocals). Their most recent album H A R D L O V E released in 2016 and debuted at #1 on the Billboard Top Albums, Top Current Albums, Top Rock Albums and Top Alternative Albums charts and #2 on the Billboard 200, their greatest debut yet. H A R D L O V E is the follow-up to 2014’s Rivers In the Wasteland, which debuted at #3 overall on the Billboard 200 and spawned the RIAA-certified Gold single “Brother (feat. Gavin DeGraw).” The hit earned the group their first GRAMMY nomination as well as a pair of Billboard Music Award nominations.

Our vision is to see impoverished communities take ownership in a sustainable healthcare model, so that they become empowered to bring about long-term change and tangible improvements in their health and quality of life. Our mission is to provide quality, affordable healthcare to people in need. We have developed a model that provides affordable health care to the communities who need it most and does not require ongoing support to keep the doors open. Each OneWorld Health medical center offers a full scope of healthcare services to the community, delivered by trained nationals and offered at a price point that is affordable to the overwhelming majority of the population. Patient fees offset the costs of running the clinic, eventually meeting or exceeding the total monthly operating costs. For more information, visit oneworldhealth.com.