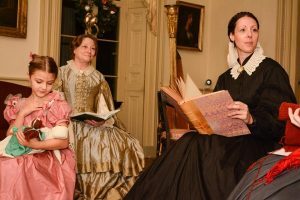 On Friday, November 30th and Friday, December 7th, the Middleton Place Foundation will present Christmas 1860, a theatrical performance held annually at the Edmondston-Alston House at 21 East Battery in Charleston.

Decorated for the holidays and lit by candlelight, the setting of the performance includes areas not seen in daily tours of the house: the slave quarters, carriage house, and inner courtyard. Visitors will tour throughout the house and see performers in every room commenting on the events of a day in December 1860.

Christmas in 1860 took place just days after the South Carolina Ordinance of Secession was signed, marking the beginning of a march towards war that would take the lives of over 600,000 Americans., more than any other conflict in the country’s history.

It’s likely that that Christmas was not a normal holiday. Still, Charlestonians would have decorated their homes and entertained extended family and friends. The Alston family almost certainly observed the holiday in their usual fashion and Christmas 1860 suggests what might have taken place on a single night during that holiday season. Theatrical performers, adorned in period costumes, will reflect on the events of the day and how the lives of their characters would soon be forever changed. Those characters include, not just members of the Alston family and their guests, but also the enslaved people whose forced labor made possible the wealth of the family and the maintenance of their lifestyle.

Highlights of the performance include the contributions of the Charleston Caroling Company. Also dressed in period garb, their repertoire includes carols that would have been sung in the antebellum period. As in the past, Fouche Sheppard, a local poet and storyteller, will interpret The Night Before Christmas in Gullah – a performance not to be missed.

Wine Under the Oaks at Boone Hall Rescheduled for January 20th