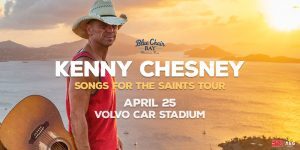 On his website, Chesney said, “Last year, No Shoes Nation took it to a whole other level and they blew all of us away. It was the kind of energy you don’t take for granted. So when we started thinking about next year, they made me wanna come to them. Rather than the massive two-day set-up, make everyone come to a stadium away from their homes, I wanted to go to where the fans live, strip things back a bit, and make it a little more intimate. I’m fired up for 2019.”

Chesney has recorded 14 albums that have been certified Gold or higher by the RIAA. He has also produced more than 40 Top 10 singles on the US Billboard Country charts, 29 of which have reached number one. He has sold over 30 million albums worldwide.

The ticket on-sale date for his Charleston area show will be announced soon. Keep an eye on the official website for more info.
–