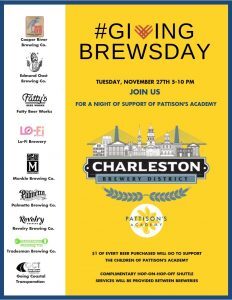 The Charleston Brewery District will celebrate “Giving Tuesday” with its own “Giving Brewsday” fundraising event on Tuesday, November 27th from 5 pm to 10 pm. Giving Tuesday, held on the Tuesday after Thanksgiving, is “a global day of giving fueled by the power of social media and collaboration.”

Charleston Brewery District’s Giving Brewsday will benefit Pattison’s Academy, a Charleston-based education and rehabilitation academy for children with profound disabilities. One dollar from each beer or ale purchased during the evening will be donated to Pattison’s Academy.

The Charleston Brewery District is the moniker given to eight breweries located in a 2.5 mile stretch on “The Neck” of the Charleston peninsula.

Complimentary “hop-on-hop-off” bus transportation will be provided by Going Coastal Transportation, who will be donating their services. The shuttle bus will circulate continuously between these eight breweries throughout the evening.

About the Charleston Brewery District