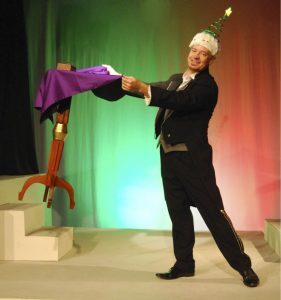 Threshold Repertory Theatre is putting a twist on the traditional holiday performance as it hosts singing illusionist Russell Anderson for “It’s a Magical Christmas.” The show runs November 30th to December 23rd at the theatre’s home base of 84 1/2 Society St. in downtown Charleston.

“It’s a Magical Christmas” features a little singing, a little dancing, and a whole lot of magic – all with a holiday theme.

Anderson has performed in The Las Vegas Legends in Concert, at America’s greatest theme parks, as co-ringmaster and singing illusionist of the Wonderland Circus tour, and he has performed on several cruise lines. Anderson also makes a cameo in the soon-to-be aired HBO series, The Righteous Gemstones, starring John Goodman and created by Danny McBride.