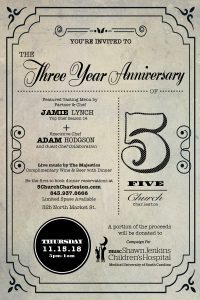 The three-year anniversary also marks the rollout of 5Church’s profit sharing program for all employees setting out on their third-year tenure.

5Church Pastry Chef Esther Steffenelli will create special desserts at an “action station” in the main dining room during the anniversary dinner. Complimentary beer and wine will be served to all guests. A limited a la carte dinner menu will also be available. The Majestics will provide live music during the evening. Other celebratory surprises are also in store.

“Ultimately, it’s a core belief of the company that anyone who’s part of the success of the business should be profiting from the business, not just from hourly pay or tips, but as a partner,” owner Patrick Whalen said. “It doesn’t amount to a ton of money, but it’s a nice extra something each quarter that demonstrates that we care and that they are important to us.”