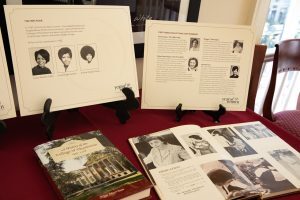 It may strike some as surprising that in the nearly 250 years since the founding of the College of Charleston, only the past 100 have included women among the student body. However, women have more than made up for lost time, now tipping the gender scales in terms of male-to-female ratios on campus and making a significant mark in every major across the institution.

Throughout the 2018-19 academic year, the College of Charleston marks the Year of Women, a centennial commemoration of the first admission of female students to the College. Through special events, exhibits and campus-wide programming, the Year of Women will illustrate the depth and breadth of women-powered milestones, which were frequently achieved with the challenges of navigating new cultural terrain.

Among the highlights of the Year of Women programming is a two-part exhibit, curated by the Office of Alumni Affairs, that showcases photographs, documents and paraphernalia connected with noteworthy CofC women and events spanning the past 100 years. The exhibit is on display Monday through Friday from 9 am to 4 pm on the 2nd Floor of Towell Library, located off Cistern Yard on the College of Charleston campus.

“Alumni Affairs is excited to be a part of the Year of Women celebration,” says Karen Jones ’74, director of alumni communications for the College. “We have so many outstanding alumnae, and this anniversary gave us the perfect opportunity to highlight their contributions and accomplishments.”

Divided into two chronological segments, the first part of the exhibit titled, “The First Fifty Years of Women at the College of Charleston,” encompasses 1918 through 1968. It is currently on view and will continue through Feb. 14, 2019.

The exhibit highlights many of the firsts among female students, such as those who first joined the fields of medicine, law, business leadership and education. The exhibit also includes the first alumnae to serve on the College’s Board of Trustees – Sylvia Craver Harvey ’58and Cheryl Whipper Hamilton ’78 – and as president of other College of Charleston boards, as well as the pioneering African-American women, including Carrie Nesbitt Gibbs ’72 and Angela Brown Gilchrist ’72, who were the first to enroll at the College in 1967.

The next part of the exhibit, “The Second Fifty Years of Women at the College of Charleston,” which covers the years 1969 through 2018, will be on view from February through August 2019.

Today, women comprise 63 percent of the student body and female graduates and include leaders in everything from medicine and government to education and astronomy.

What’s more, since biology professor Maggie Pennington joined the College in 1962 as the first female tenure-track faculty member, women have shared their knowledge and their voices with new generations of students, demonstrating in so many ways the limitless potential of any individual when given the opportunity. Today, the College employs four female academic deans and 44 percent of the College’s roster faculty are women.

“In doing the research, I learned we have much to celebrate,” says Jones.

To find out more about the Year of Women program, visit yearofwomen.cofc.edu.

Luxury Downtown Charleston Property with Private Dock and LEED Designation on the Market for $7.95 Million