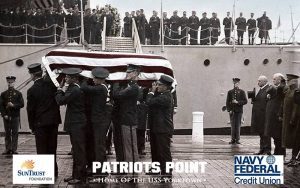 Combat historian and bestselling author Patrick O’Donnell will discuss his latest book The Unknowns: The Untold Story of America’s Unknown Soldier and WWI’s Most Decorated Soldiers Who Brought Him Home, during a free Patriots Point Naval & Maritime Museum event aboard the USS Yorktown on November 8th at 7 pm.

The event will commemorate the 100th anniversary of the armistice that ended World War I, and is the part of the museum’s symposium series, “Ordinary People Doing Extraordinary Things.”

“People know very little about the First World War, but it was a pivotal point for our country and really propelled the United States into the superpower that we are today,” Patriots Point Naval & Maritime Museum Executive Director Mac Burdette, said. “The creation of the Tomb of the Unknown Soldier is fascinating and involves nine men who served in some of the most important battles of WWI. We encourage the community to enjoy an evening aboard the USS Yorktown and hear stories of valor and sacrifice.”

In addition to the free symposium, Patriots Point will also commemorate World War I by participating in Bells of Peace. At exactly one hundred years to the moment that the armistice between the Allies and Germany was signed, November 11th at 11 am, the museum will ring a bell 11 times to honor and remember the 116,516 Americans who gave their lives in the war.