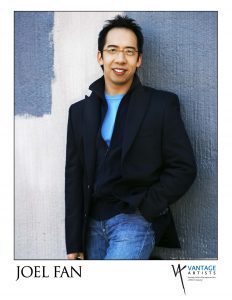 On Thursday, November 15th at 7 pm, the Charleston Library Society will open its doors and its beautiful grand piano to welcome a pianist of national and international renown for an intimate evening of enlightening music.

For the past two seasons, pianist Joel Fan has held engagements with the New York Philharmonic, the Odessa Philharmonic, and the Royal Stockholm Philharmonic in concerto performances of Rachmaninov, Beethoven, and Messiaen. He collaborated with leading conductors (David Zinman, Alan Gilbert, and David Robertson) and with soloists like Yo-Yo Ma in Beethoven’s Triple Concerto. His solo programs featuring both world music and traditional music received masses of critical acclaim. A “champion of new music, explorer of world music,” (Boston Globe), Fan will bring his musical virtuosity to the Charleston Library Society for one night only.

This ticketed event is $35 for CLS members and $45 for all other guests. To purchase tickets, call 843-723-9912 or visit http://www.charlestonlibrarysociety.org.

Pianist Joel Fan is acclaimed as “soaring” (Los Angeles Times), “fantastic” (Washington Post), and possessing a “probing intellect and vivid imagination” (New York Times). Celebrated for his exuberant virtuosity, and a bold repertoire that embraces piano classics and inspired discoveries of contemporary and world music, Fan re-invents the piano recital by illuminating the rare and unexpected – creating, in the words of the Baltimore Sun’s critic Tim Smith, “one of the most satisfying piano performances I’ve heard.”

As a concerto soloist, Fan has performed over 40 different concertos with orchestras worldwide, including the New York Philharmonic, the Royal Stockholm Philharmonic, the Odessa Philharmonic, Singapore Symphony, the Boston Pops, and London Sinfonietta, with conductors such as David Zinman, Zubin Mehta, Alan Gilbert, Keith Lockhart, and David Robertson. According to the Boston Music-Intelligencer: “We’ve heard many of the great pianists… Fan belongs in the company of the best.”

About The Charleston Library Society

Follow us
Related Topics:charleston library societyJoel Fan
Up Next