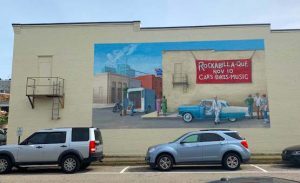 The producers and sponsors of Rockabillaque, the biggest event of its kind in the Carolinas, are proud to present the festival’s first official mural, designed and painted by well known local artist David Boatwright. The mural, which made its official finished debut last week, captures the spirit of the festival, as well as the historic Olde North Charleston neighborhood where the festival takes place, Park Circle.

The mural, located on the side of the Olde Village Market building (1073 E Montague Ave.), is a tribute to the mid-century culture of Rockabillaque and the neighborhood of Park Circle, located along the Cooper River near the Naval Shipyard and Charleston Old Naval Base. Vintage photographs of Park Circle were used as inspiration for the mural, as well as nods to the neighborhood as the central hub for the naval base families, factory workers from the paper mill, and other establishments through the mid-century era.

A Charleston native since 1984, Boatwright has worked as a designer, painter, filmmaker, and musician. Working under the mantle of Lucky Boy Art, Boatwright’s painting has evolved over the years into a specialty as he began creating large murals and hand-painted signs on many exterior façades around Charleston. In addition to the signs, he has also been commissioned to create murals and paintings for business interiors, as well as studio pieces for collectors and commercial establishments.

“This mural is a remembrance of the North Charleston community in the latter part of the 1950’s and how it may have felt to be there,” Boatwright said. “Not only is it a nod to that time and place depicting the working men, women, and Navy men of the neighborhood, it also serves double duty as a reminder of the Rockabillaque festival. Stylistically, this made sense since the culture of Rockabilly owes a lot to the look of the 1950’s decade. Painting the mural was a great way to get to know the neighborhood and its residents. I was really struck by the cohesiveness and friendly vibe in Park Circle.”

After the conclusion of the Rockabillaque festival on November 10th, the mural will be updated by Boatwright to say “Welcome to Park Circle” and will remain as a permanent tribute to this historic neighborhood and its residents, workers, and military – from its booming mid-century era, to the vibrant and bustling neighborhood that Park Circle is today.

The mural is presented by Pabst Blue Ribbon alongside Vive Le Rock Productions, the producers of Rockabillaque, and was done in cooperation with the City of North Charleston.

Rockabillaque (Rock-A-Bill-A-Que) returns on Saturday, November 10th and will benefit Valiant: Animal Rescue + Relief. Now in its sixth year, the festival has grown in attendance to over 10,000 people, becoming the biggest event of its kind in the Carolinas. This action-packed day includes a Classic Car & Vintage Bike Show with more than 300 cars and bikes, live music from around the country on over four outdoors stages, contests including a pin-up pageant, tattoo, beard & mustache competitions and more. The festival includes all of the Park Circle businesses who participate in the celebration and is free to attend, night and day.