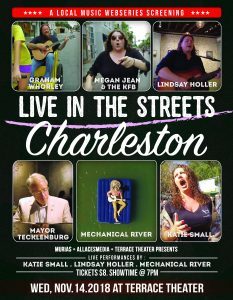 Award-winning filmmaker Andy Coon (All Aces Media) loves Charleston and everything about it – from the places that make it a great place to live, to the artists who help bring the city to life with their remarkable talent. That’s why he created “Live in the Streets,” a web series that follows, for a song, local musicians as they perform in well-known Holy City locales.

Totaling six videos, the “Live in the Streets” collection will be screened in its entirety on Wednesday November 14th from 7 pm to 9 pm at the Terrace Theater. In addition to the filmed performances, a few of the series’ stars – Joel Hamilton (Mechanical River), Lindsay Holler, and Katie Small – will perform live at the screening.

Whether it’s an operatic disruption at the farmer’s market on Marion Square or a flash performance during a First Friday art walk, “Live in the Streets” zooms in on the local landscape and the music that soundtracks Charleston – all captured in its rawest form. Coon is careful not to edit out the sounds that surround the camera crew:  water rippling in Shem Creek, the chugalug of a rickshaw, laughter on King Street. It’s all part of the experience.

Tickets for “Live in the Streets” are $8 and can be purchased here.

Coon is also behind the web series “Often Awesome,” an award-winning depiction of a close friend’s battle with ALS, and Talent Freaks, a window into the creative processes of outstanding Lowcountry artists. Since completing Live in the Streets Charleston, Coon has expanded the series to other cities like Nashville, Atlanta, and Kansas City.

The Terrace Theater is located at 1956 Maybank Hwy.