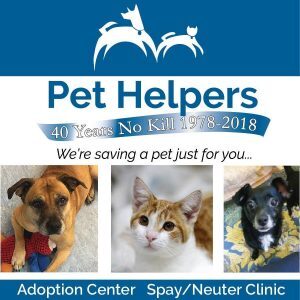 Founded in December 2014, Sinbad-Sadie’s mission was to reduce the euthanasia of adoptable animals in South Carolina. They did this by coordinating with area shelters to ease overcrowding and find loving, permanent homes for abandoned, abused and neglected animals. Over the past four years, Sinbad-Sadie has adopted out over 1,200 dogs through a completely volunteer-based program. They have utilized a strong group of seventy-five volunteers who are the key to Sinbad-Sadie’s success.

“Pet Helpers is a terrific fit for us and will provide the resources of a full-service shelter to our program,” said Co-Founder & President Kym Long-Wallace. “The merger will enable us to save even more adoptable, at-risk animals.”

Pet Helpers was founded by Carol Linville, Board President, as the first no-kill shelter in the Lowcountry, with the goal of ending the euthanasia of healthy, adoptable pets. This year, Pet Helpers will be celebrating its 40th anniversary and has saved over 45,000 lives since its inception in 1978.

Alan Berger, Pet Helpers’ Executive Director states, “We are honored that a high quality rescue like Sinbad-Sadie selected to join forces with Pet Helpers.  We will be able to greatly expand our own foster program by adopting the successful program from Sinbad-Sadie; hence the new name associated with this part of Pet Helpers, the Sinbad-Sadie Foster Program.”

Over the next few months, there will be a transition of blending Sinbad-Sadie into the full-service operations at Pet Helpers. Kym Long-Wallace will be joining Pet Helpers to assist with the transition and become the Pet Helpers Adoption Manager, overseeing the foster program, animal intake, and adoptions.

Follow us
Related Topics:pet helpersSindbad-Sadie Second Chance Rescue
Up Next