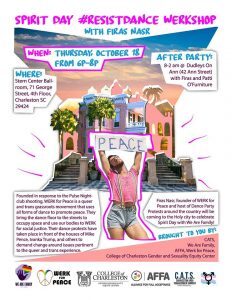 The dancers will be clad in rainbow paraphernalia, dance to loud, bumping beats, and twerk unapologetically through the streets.

Anti-trans and queer motivated violence in the city of Charleston has resulted in numerous attacks on the queer and trans community. On August 19th, 2018, Kendra Martinez, a Latinx transgender woman of color, was violently assaulted on Ann St. On September 20th, 2018, the Closet Case Thrift Store was vandalized by someone throwing bricks as they were yelling, “I’m sick of all the gay shit.” Closet Case is a LGBT-run social enterprise that benefits We Are Family, the only organization in SC that serves LGBT youth. The demonstration seeks to center and celebrate the bodies and experiences of queer and trans people in Charleston and to send a clear message to policy makers and lay people that bigotry and hate will not be tolerated.

Vanity Reid, one of the organizers, says, “Far too often, we are attacked for claiming autonomy of our bodies and simply existing in a world that views our presence as defiant. We are attacked and then questioned about the validity of our trauma; our attacks are then discredited and assumed to be related to some sort of deceit or untruth on our behalf. Today we claim our space and speak power over our very ownership of this space and the spaces we navigate daily.”

The protest follows a workshop co-sponsored by We Are Family for their annual #SpiritDay event. Each year, millions of people from all across the globe wear purple on #SpiritDay in a stand against bullying and to show their support for LGBT youth. Spirit Day draws the participation of celebrities, media outlets, corporations, sports leagues, faith groups, schools, local communities and even national landmarks. For more information about Spirit Day, visit www.glaad.org/spiritday. The event is designed to help youth who have been marginalized on the basis of sexual orientation and/or gender identity, to educate adults and straight ally youth about the struggles and of lesbian, gay, bisexual, transgender, questioning, and intersex (LGBTQI) youth, and to take a stand against the bullying and harassment that occurs among peers.

“We are here to reclaim the spaces in which we have been harmed and fill them with joy,” says Leigh LaChapelle, an organizer for tonight’s protest. “We are here to show our community that we stand behind them.”

Follow us
Related Topics:Charleston Area Transgender SupportGLAADLGBTQspirit daywe are family
Up Next

Food Truck Friday Returns to The Ponds in November