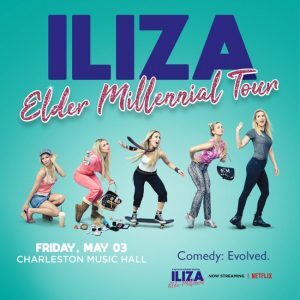 Iliza Shlesinger, one of today’s top comedians, will return to the Holy City next year. She’ll be performing at the Charleston Music Hall on Friday, May 3rd at 7 pm. Tickets go on sale Friday, October 19th at noon.


Last year, she hosted her late night, limited run talk show Truth & Iliza on Freeform. In November 2017, she released her first book Girl Logic: The Genius and the Absurdity, a subversively funny collection of essays and observations on a confident woman’s approach to friendship, singlehood, and relationships.

Shlesinger just premiered Elder Millennial, her fourth Netflix stand up special for the streaming service. The campaign featured her styled in classic looks from the late 90s/early 00s, as well as an official Spotify playlist featuring all her favorite songs of the era. The list has become a highlight with fans who are giving it high praise on social media, while artists of the era (New Found Glory, 311, and Lance Bass) are reposting it.

In addition to her stand up, she recently completed filming the Paramount Pictures movie Instant Family, starring Mark Wahlberg and Rose Byrne which is slated for release in February 2019.

Originally from Dallas, Shlesinger moved to Los Angeles after graduating from Emerson College. She is the only female and youngest comedian to hold the title of NBC’s Last Comic Standing. Her debut comedy special, War Paint, was acquired by Netflix and was named one of its Top 10 Albums of 2013. Iliza’s follow-up Netflix specials, Freezing Hot and Confirmed Kills, sealed her title as one of the hottest touring acts in America, with Esquire Magazine listing her as one of the top working comedians today.

Other career highlights include:

Tickets to Shlesinger’s Charleston show can be purchased here.
–

Follow us
Related Topics:charleston music hallIliza Shlesinger
Up Next