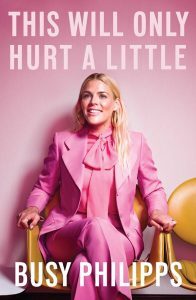 Since falling in love with Charleston while filming Vice Principals, Busy Philipps has returned with her family many times. On Saturday, October 20th at 7 pm, join Blue Bicycle Books in welcoming her back to the Holy City at the Charleston Museum, as she celebrates the release of her book This Will Only Hurt a Little.

Tickets include a hardback copy of This Will Only Hurt a Little, pre-signed by the Philipps and access to a moderated discussion with the author.

Philipps is an actress best known for roles in cult TV classics like Dawson’s Creek, Freaks & Geeks, Cougar Town, ER, and most recently, HBO’s Vice Principals. She has appeared in fan-favorite films such as Made of Honor, I Don’t Know How She Does It, He’s Just Not That Into You, White Chicks, and The Gift. She also was one of the writers of the hit film Blades of Glory.

A hilarious, heartfelt, and refreshingly honest memoir by the beloved comedic actress has become “the breakout star of Instagram stories…Imagine I Love Lucy mixed with a modern lifestyle guru” (The New Yorker).

Can’t make it to the event? You can still purchase her book here.

“Elder Millennial” Iliza Shlesinger Returns to Charleston in May