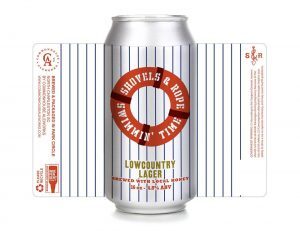 Beloved Charleston musicians Shovels & Rope have teamed up with Park Circle’s Commonhouse Aleworks to brew a beer together in a charitable collaboration that will benefit Metanoia, a North Charleston based non-profit.

Michael Trent and Cary Ann Hearst, the duo behind Shovels & Rope, are excited to be part of another endeavor that benefits the North Charleston community. North Charleston is also the location of the band’s spring-time High Water Festival, an extremely popular music, food, and libation experience.

“North Charleston was happy to receive the High Water Music Festival and Michael and I want to make sure that we are a continual part of this community and not just visitors that come once a year,” Hearst said. “We were presented with the opportunity to brew a cool beer with a cool group of people and to be able to send the proceeds to a group who is making a meaningful impact on this community. It was a no-brainer.” 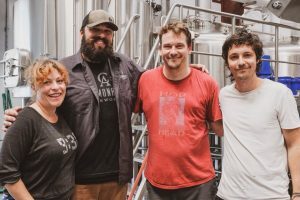 The beer, called Swimmin’ Time, is a light and quaffable Lowcountry lager. This style was chosen as the perfect compliment to the Charleston climate, as well as having the most appeal to the largest amount of folks.

“We wanted to make a beer that you could enjoy out on the boat or sitting in a field at a music festival listening to your favorite bands,” Trent said. “A beer that you could have a couple of. Crisp and refreshing and appealing to all beer drinkers.”

Commonhouse will be releasing the beer in 4 packs of 16-ounce cans and limited draft at the brewery on Friday, October 26th. Bill Stanfield and other representatives from Metanoia will be on hand with information about the projects that Metanoia is working on.

Metanoia was founded in the early 2000s with an asset-based approach to healing child poverty in North Charleston. It has since grown in its community led mission to address other needs, such as economic development, safe affordable housing, education, and job training.