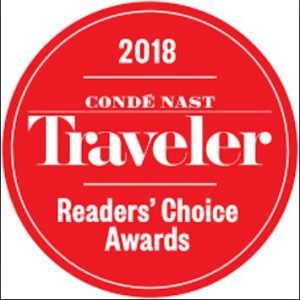 For the 8th consecutive year, Charleston has been named the one of the most popular cities in the U.S., according to Condé Nast Traveler magazine’s 31st annual Readers’ Choice Awards. The winner’s were chosen after more than 429,000 reader surveys were filled out and tallied.


For the fourth straight year, the magazine had separate categories for big and small cities. In the past, Charleston took home the top spot regardless of city size, but for the last four years it had to settle for winning the “small city” (populations under a million) category. Chicago was once again chosen as this year’s Best Big City in the U.S.

“Folks think of Charleston as a small town, and that’s true if you’re just looking at the numbers. But when you consider history, culture, food, and charm, this city punches like a giant – no wonder it’s topped our list of best small cities for eight years running….Not only can you get world-class barbecue, seafood, and regional Lowcountry classics; you can get them done extraordinarily well, in traditional and modern styles. And in extraordinary settings…The city’s roots may be its rich Southern history, but Charleston stands fully in the now..”

While same may gripe about the Holy City winning another award, it’s difficult to deny the positive impact tourism has on our home. Helen Hill, CEO of Explore Charleston’s, says research shows that a strong destination brand helps create and maintain a thriving, vibrant community.

“Tourism propels economic activity and is the foundation of our region’s prosperity,” Hill said via a release. “Among other things, contributing to a stronger tax base reduces pressure on property taxes within local municipalities.”

The College of Charleston’s Office of Tourism Analysis estimates the tourism industry accounted for $7.4 billion in economic impact across the greater Charleston area last year. The industry directly employs over 42,000 individuals throughout the region.

Conde Nast Traveler’s annual accolades have been around since 1986 and are based on each city’s rankings in several categories – including arts and culture, sights and scenery, public transportation, hotels and resorts, restaurants, and friendliness. Charleston first appeared in the “Top U.S. Cities” list in 1993 with a sixth place finish. It first earned the #1 ranking in 2011.

Santa Fe, New Mexico ranked second, while our neighbors Savannah (No. 3) and Greenville (No. 9) also made the top ten.

In addition to Charleston’s No. 1 Small City in the U.S. ranking, the Beach Club at Charleston Harbor Resort and Marina ranked No. 4 among the top resorts in the South.

Plus, the following were chosen as the top hotels in the Charleston area for 2018 (listed alphabetically):

You can see the full list of the Best Small Cities here, and the entire 2018 Readers’ Choice Awards here.

In July, Charleston was named No. 1 City in the U.S. by Travel+Leisure readers. The 2018 award marked Charleston’s sixth consecutive year atop that list.