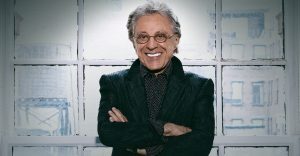 Valli, who came to fame in 1962 as the lead singer of the Four Seasons, is still going strong in the 21st century. Thanks to the massive success of the Tony-winning musical Jersey Boys, which chronicles the life and times of Frankie and his legendary group, such classic songs as “Big Girls Don’t Cry,” “Walk Like a Man,” “Rag Doll,” and “Can’t Take My Eyes Off You” are all the rage all over again.

Sure, the majority of the 71 chart hits of Frankie Valli and the Four Seasons (including 40 in the Top 40, 19 in the Top 10 and eight No. 1’s) came during the 1960s, but the music didn’t disappear. He has toured almost continuously since 1962, and his songs have been omnipresent in such movies as The Deer Hunter, Dirty Dancing, Mrs. Doubtfire, Conspiracy Theory and The Wanderers.

Follow us
Related Topics:Frankie Valli & The Four SeasonsGaillard Center
Up Next