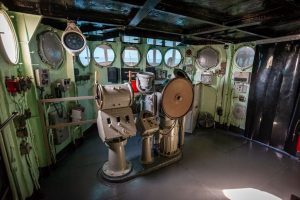 Patriots Point Naval & Maritime Museum recently opened a new exhibit that brings to life the portholes aboard the historic USS Laffey to tell how a Goose Creek missile facility once supported the United States’ operations during the Cold War. The new offering is an addition to the museum’s popular and most technologically-advanced exhibit, the Combat Information Center (CIC) Experience.

The pilothouse aboard the destroyer USS Laffey was where the ship’s helmsman steered the vessel. The portholes that once provided a view of the sea have been redesigned to simulcast a projection about how a Polaris missile assembly plant that was located 17 miles from Charleston Harbor was involved in the Cold War. The plant, known as POMFLANT, built missiles and then loaded them onto submarines for use around the world.

“For many years it was common to see submarines travel back and forth in Charleston waters,” Patriots Point Executive Director Mac Burdette said. “As we continue to design exhibits that relate to the Cold War, we want to put emphasis on stories that have a connection to the community. South Carolina had a major role in defending the United States during the incredibly tense years of the Cold War. We are proud of that.”

The new pilothouse exhibit is included in the regular museum admission price. Funding for the addition was made possible by donations from the National Association of Destroyer Veterans (The Tin Can Sailors), the USS Compton (DD-705) Association, the USS Sperry (DD-697) Association, and private donors.

Patriots Point Naval & Maritime Museum is open daily from 9 am to 6:30 pm.