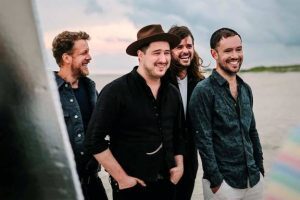 English folk rockers Mumford & Sons will be playing at the North Charleston Coliseum on March 18th, 2019. The concert is part of the band’s worldwide arena tour featuring a new in-the-round stage design. Special guest Maggie Rogers will join as support.

Marking ten years since Mumford & Sons made their meteoric debut, the new music follows 2015’s Wilder Mind, which debuted at No. 1 in the U.S., U.K., Australia, Canada, Ireland, the Netherlands and Norway. Previous LPs include 2012’s Babel, which was awarded the 2013 Grammy for Album of the Year, and their 2009 debut, Sigh No More.

Tickets for the band’s North Charleston show go on sale Friday, October 12th at 9 am.
–

Taylor Festival Choir Presents Music and Mindfulness: A Concert of Joy and Serenity