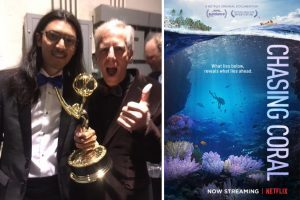 College of Charleston biology professor Phil Dustan has won an Emmy Award for his part in the Netflix film Chasing Coral. The film won the award for Outstanding Nature Documentary during the  39th Annual News and Documentary Emmy Awards Ceremony on Monday.

The film follows a team of marine biologists who traveled to different parts of the globe taking photographic evidence of corals dying from rising temperatures.

Dustan is featured in the award-winning documentary, showing the filmmakers the destruction of the Carysfort Reef off the coast of Florida.

The College of Charleston professor has studied the Carysfort Reef since the 1970s, and has frequently thought over the years about how to advertise the grave destruction of global warming on the ocean.

“This film gave a voice to coral reefs that we haven’t had since Jacques Cousteau,” says Dustan.

In May, Chasing Coral won a Peabody Award for “bringing climate change and its deadly consequences into sharp and immediate focus.” Named for American businessman and philanthropist George Peabody, the Peabody Awards honor excellence in storytelling in television, radio and online media.

Dustan in a marine ecologist specializing in the ecology, vitality, and remote sensing of corals and coral reef communities. He has spent the past several decades researching coral reefs in the Florida Keys, Bahamas and throught the Caribbean Sea. In recent years he has developed new remote sensing techniques for coral reef change analysis using Landsat imagery. He has also collaborated on developing molecular stress markers for assessing coral health.

In Chasing Coral, Dustan positions viewers in the driver’s seat of climate change by asking, “Do we need trees? Do we need forests? Do we need reefs? Or do we just sort of want to live in the ashes of all of it?”