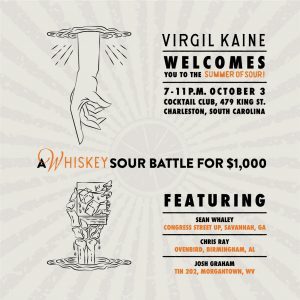 Virgil Kaine Lowcountry Whiskey launched its inaugural Summer of Sour competition in May 2018, challenging bartenders along the East Coast to create the most tantalizing whiskey sour, and Charleston gets to choose the winner.

The first round asked bartenders to create a one-of-a-kind, Virgil Kaine whiskey cocktail that would be featured both on Instagram and in the bartender’s workplace. The top 10 whiskey sour creators, as voted by fans on Instagram, then battled it out via online voting to select the top three finalists. Two notable mentions that made the top 10 are Charleston’s Justin Simko from Husk and Sam Gabrielli of Proof.

On October 3rd, Virgil Kaine will partner with The Cocktail Club to host its final whiskey sour showdown this October. Free samples will be provided to help whiskey sour enthusiasts select the $1,000 grand prize winner. The Cocktail Club will also sell the cocktails for those who want a full taste of the sour.

This year’s top three finalists are: Sean Whaley, bartender at Congress Street Up in Savannah, who created the “Leviathan”; Chris Ray, bartender at OvenBird in Birmingham, with “Low Bush Inspiration”; and Josh Graham, bartender at Tin 202 in Morgantown, with his drink “Thickfreakness.”

Follow us
Related Topics:the cocktail clubvirgil kaine
Up Next