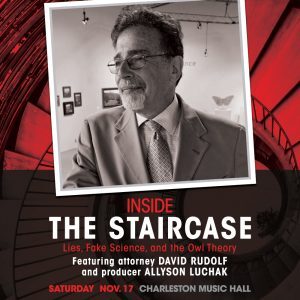 The Charleston Music Hall will present An Evening with David Rudolf, a lawyer that was prominently featured in Netflix’s The Staircase. The event will be held at the downtown venue on Saturday, November 17th.


Rudolf, who was Michael Peterson’s defense attorney, will provide behind-the-scenes insights into the case and the making of the series. The discussion, centered on questions from the audience, will examine Rudolf’s decision to let the filmmakers have access to his trial preparation, and provide insight into the most contentious issues in the case, including the state’s blood spatter expert, Elizabeth Ratliff’s death in Germany, Peterson’s bisexuality, and the Owl Theory.

Tickets are $35, with an optional dinner and show add on for an additional $32, and go on sale to the public on Friday, September 28th at 10 am.

The Staircase was a 2004 French television miniseries that documented the trial of Michael Peterson, who was convicted of murdering his wife, Kathleen Peterson. The series – along with three new episodes – was later picked up by Netflix and released on the streaming service in June 2018.

Follow us
Related Topics:charleston music hallDavid Rudolf
Up Next