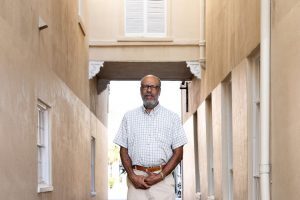 The College of Charleston announced Monday the institution’s creation of the Center for the Study of Slavery in Charleston.

Through scholarly research and public programming, the new center will examine the impact of slavery and race-related issues in the City of Charleston, including the surrounding region, and the College of Charleston from the late 18th century through the civil rights era and the continued impact and legacy of slavery in the present.

The center will build on the work begun with the College of Charleston’s affiliation with over 40 other universities in the Universities Studying Slavery consortium, an effort organized by the University of Virginia.

Bernard Powers (right), professor emeritus of history at the College, will serve as the center’s first director. Powers taught in the Department of History from 1992 to 2018, serving stints as department chair and director of the master’s program in history. He has published numerous works on African-American social and cultural history. His book Black Charlestonians: A Social History 1822-1885 (University of Arkansas Press, 1994) won a Choice Award for Best Academic Books. He also co-authored We Are Charleston: Tragedy and Triumph at Mother Emanuel (Thomas Nelson, 2016).

Given the fact that nearly half of all enslaved Africans who were forcibly brought to North America arrived through Charleston, Powers said it is only natural that the College of Charleston would create a center to study slavery’s impact and legacy on the city and its institutions.

“The College of Charleston is particularly well-suited for this kind of work because of its high-caliber faculty and staff members with expertise, interest and a demonstrated record of achievement in areas crucial for the center’s success,” said Powers, noting that a priority of the center will be to seek grant and philanthropic support for its work.

Powers is a member of the board of directors of the International African American Museum (IAAM), which is scheduled to open in Charleston in late 2020. He expects the center to develop a close working relationship with the IAAM, with the goal of establishing joint public programs and academic partnerships.

Reporting to the Provost, the new center will also work collaboratively with the College’s Avery Research Center for African American History and Culture, utilizing Avery’s collection of archival materials documenting the history, traditions, legacies, and influence of African Americans and their place in the American narrative.

“This interdisciplinary center is the result of months of organizing by students, faculty, staff, and community members, who have imagined a better way for the College to facilitate this urgent and important work,” said Provost Brian McGee.

“The new center will allow the College to make new and more powerful connections between many academic programs, including African American Studies, history, English, art and architectural history, the Carolina Lowcountry and Atlantic World Program, and the libraries,” said McGee. “Working together, the College community, in cooperation with scholars from around the world who work with the center, will deepen and transform our understanding of the past and our engagement with the challenges of the present.”

Follow us
Related Topics:college of charlestonDr. Bernard Powers Jr
Up Next