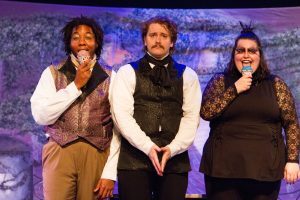 The first new production from South Carolina’s only independent children’s theatre, is Penelope and the Gods of Olympus. An original play written by Teralyn Reiter and Robin Burke that weaves the Greek myths of Daedalus and Icarus, Apollo and Artemis, and Persephone and Demeter into an interactive performance, the play draws on mythology and also teaches audiences about friendship, the importance of community, and the consequences of our actions. Designed for students in Kindergarten through third grade, the story begins when Penelope Pratt is stranded after dark in her town’s art museum. As the statues magically come to life, Penelope learns about the stories of the Greek Gods and discovers the relevancy of their tales.

An exciting 40-minute play, Penelope and the Gods of Olympus, uses audience participation and interaction as storytelling techniques while introducing children to new characters from an old world. Additionally, the play comes with up to three possible in-class workshops and a study guide for teachers to use.

The second production is a haunting and entertaining play that delves into the work of Edgar Allan Poe. The Poe Project follows the writer as he struggles to understand his artistic purpose. One of the most influential and famous writers of the 19th century, Edgar Allan Poe created memorable poems and characters in his many works. The play finds Poe interacting with two of his fictional characters, Inspector Dupin and the Raven (from the poem of the same name), as they explore what it means to write and to be fulfilled by one’s work.

Performed with permission from the Montana Repertory Theatre, the show is part of the new “Gaillard On Tour” initiative, an initiative that works to bring quality theatre to Charleston County Schools and beyond. It continues the partnership that Storytree Children’s Theatre and the Gaillard Theatre established in 2017.

The Poe Project is ideal for 4th through 8th graders and is accompanied by three optional workshops. Currently, The Poe Project already has over 16 performances booked in high schools and middle schools throughout the tri-county area.

In the 2017-2018 school year, Storytree Children’s Theatre launched its inaugural touring branch with a production of Aesop’s Fables. The touring show reached over 6500 students in the Charleston, Dorchester and Berkeley communities and went to over twelve schools.

“Seeing kids’ faces when they experience professional theatre is truly magical, and we are glad to be a part of making that a reality for the schools in our community,” Teralyn Reiter, director and founder of Storytree Children’s Theatre says. “Not every child has access to professional theatre, so Storytree is on a mission to bring the theatre to them in a way that inspires and educates.”

The Poe Project is part of the new Gaillard on Tour initiative, an initiative that works to bring quality theatre to Charleston County Schools and beyond. It continues the lasting partnership that Storytree Children’s Theatre and the Gaillard Theatre established in 2015.

Reiter was recently awarded a National Artist Fellowship from the Wolf Trap Institute for Early Learning Through the Arts. Additionally, she was featured on Fox 24 News Now to discuss the upcoming touring shows and Storytree’s goals.