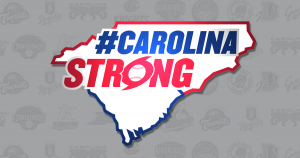 In the wake of Hurricane Florence that hit and devastated parts of South Carolina and much of North Carolina over the past week, thirteen Minor League Baseball teams in the two states are coming together to support and raise money for those victims in their states.

The alliance will work together to maximize fundraising efforts across the state, utilizing the hashtag: #CarolinaStrong.

Those wishing to contribute can head to the #CarolinaStrong GoFundMe page at the following link: http://bit.ly/GoFundCarolinaStrong. All funds raised through this campaign will be donated to the American Red Cross in affected areas of North Carolina and South Carolina.

Famulari’s Raising Money for Americares on 9/26