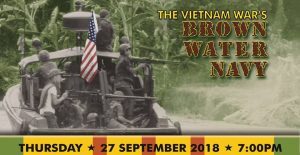 Patriots Point Naval & Maritime Museum will host a free symposium entitled “The Vietnam War’s Brown Water Navy” aboard the USS Yorktown on Thursday, September 27th at 7 pm about the use of small commercial boats that were adapted by the Navy so they could be used to patrol the tight and shallow waterways of South Vietnam during the war.

The event will feature a panel of veterans who were often exposed to intense enemy fire while operating these types of vessels, many of which were water jet-driven and offered little to no protection from attacks.

The faction of these small river patrol boat support camps is often referred to as the “Brown Water Navy.” In December 1965, the U.S. Navy initiated Operation Game Warden to patrol the major rivers and canals in South Vietnam.  Using a fleet of 31-foot patrol boats (PBRs), 50-foot aluminum boats (Swift Boats), pontoons, WWII- era landing crafts, attack helicopters, and SEAL units, this inshore naval force interdicted enemy troop and supply movements, and hindered large scale Viet Cong operations. The Navy operated in the inland waters until 1970 when the units were turned over to the South Vietnamese and Cambodian governments.

In addition to speaking about their memories of battle, the panelists will also discuss their return home from the war, and symptoms of Post-Traumatic Stress Disorder that many river patrol boat crewmen experience today.

“It took a lot of guts to be part of river crew,” said Patriots Point Naval & Maritime Museum Executive Director Mac Burdette. “These men were sitting ducks asked to do something they knew came with a great chance they were going to be injured or killed. A lot of times the PBRs were used as bait to draw enemy fire. Imagine how you would feel in an open boat as you navigate a tight river where any turn could lead to an enemy who wanted to kill you.”

Patriots Point Naval & Maritime Museum is home to one of the last remaining Mark 1 PBRs. The boat is on display inside the Vietnam Experience Exhibit where it is used to tell the story of South Carolina native and Medal of Honor Recipient James Elliott Williams. Williams earned his medal for heroic actions in 1966 while aboard a PBR in an isolated area of the Mekong Delta in Vietnam.

Earn Free Books by Volunteering at That BIG Book Sale